Wow, man... didn't know the backstory!  Feelz, and I don't toss that around often!  Great to be on project, thanks for asking me.  And folks, please consider my voice at your disposal... I would have 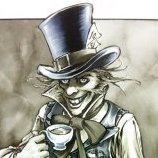